Pursue the red mark and inherit the revolutionary spirit

In 2020, the Shanghai-Soviet road-rail dual-use road-rail bridge opens to traffic, and the 99th birthday of the Communist Party of China will be celebrated. In order to strengthen the party awareness of party members and play a role as a pioneer and exemplary party member, the Zhangjiagang Zhonghuan Hailu Party Branch organized all party members to carry out the red education theme party day activities of “pursuing red memories and inheriting the revolutionary spirit”.

The opening of the Shanghai-Sutong Railway has fulfilled the long-awaited “high-speed rail dream”, allowing the “unarmed” port city to formally connect to China’s railway network, striding into the era of high-speed rail. The party members are at the high-speed rail station and feel the booming economy of Zhangjiagang firsthand.

Later, the party members came to the “1926 Jincun Party Branch Site” of the Red Education Base in Yuanmaoli, listened to the brief history and watched the feature documentary under the leadership of the guide. In-depth understanding of the history of the Chinese Communist Party Jincun party organization in 1926 relying on the masses, mobilizing the masses to overthrow the local tyrants and evil gentry, supporting the National Revolution, and accepting the reeducation of revolutionary traditions.

“Don’t forget the original aspiration and keep the mission in mind.” Through this red education theme party day activity, the party members’ sense of party spirit has been strengthened, and the understanding and understanding of the party’s fine traditions and revolutionary spirit have been deepened. Inspired, we will remember history, cherish the present, and create the future. 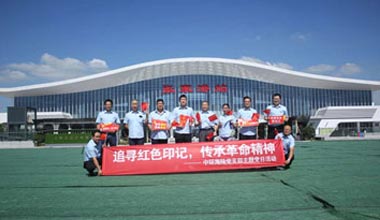